Who: Angela Flanders and her daughter Kate. Angela is an award-winning perfumer who has just celebrated 30 years in the perfume business, selling beautifully crafted fragrances from her two East London shops. Kate runs her Precious fashion boutiques in close proximity to the perfume stores.

Angela: My mother was a great devote of Shalimar and that kind of perfume stayed with me. The first Oriental I had a crack at, Ottoman, is a Shalimar type. My father didn’t wear perfume but loved the scent of mimosa, he used to very extravagantly fill the house with it when it arrived at the florists, there were all sorts of complaints about his extravagance, but it was nice.
Kate: You’ve made a mimosa perfume…
Angela: Yes I did it for Roksanda (Ilincic). I made it for her first catwalk show. Her PR, Mandi Lennard, rang up and wanted a perfume in two weeks! I made Topaz, which was a bit of a blend because there wasn’t any time, which we still sell. It’s got all the oriental notes, but is much more woodsy, spicy and bergamoty.
Kate: That show, I remember was full of swoopy full skirts, and Roksanda sprayed the hems so as the girls walked the fragrance floated up to the audience. 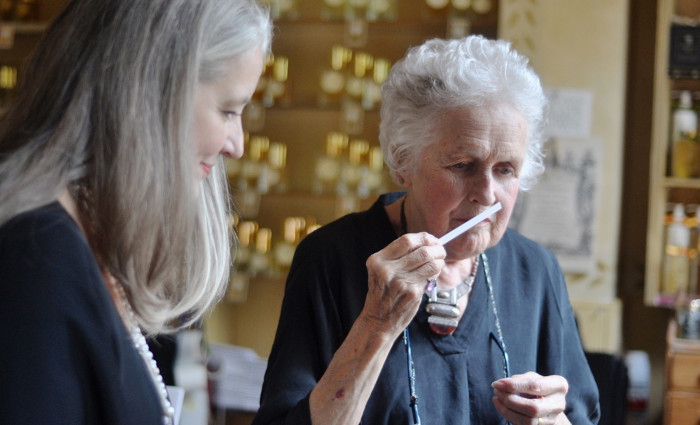 Angela: My first fragrances -when I was about 10 or 12 years old –cost sixpence and came from Woolworths with my pocket money. One was called Evening in Paris, which had a blue bottle with silver bits on it, and the other was Californian Poppy. I thought they were lovely. When Kate was little, I mostly smelled of wood shavings, because I was always doing decorative painting and doing up houses.
Kate: Ha yes! And turpentine… Dad wore Eau Savage, which was his smell. The first perfume I had, my first grown up one that I really loved was Balmain’s Ivoire.
Angela: Do you remember when Les Senteurs first opened? We were so excited about it and you got Annick Goutal, the one she made for her daughter, Eau de Camille.
Kate: Actually I think I had Eau L’Hadrien.
Angela: Annick used to come to the market and into the shop…it was so sad, she died too early.* 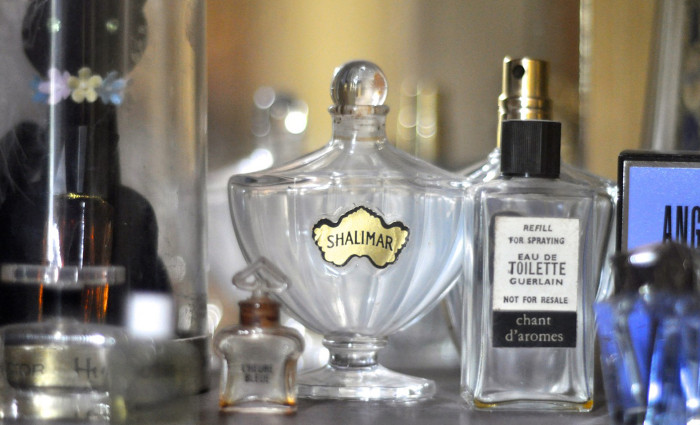 Angela: When I started I made home fragrances and pot pourri. I had 15 home scents and one of my customers, who knew a lot about beauty, said ‘you’ve got a good collection’, so I moved them all into personal scents. I forget which year it was I did it.
Kate: I’ve loved watched it along the way, seeing the first ideas evolve, how they are tweaked until mum’s happy with them, learning to love some things and not others. I’ve always felt it’s Angela’s thing, but I love the perfumes and now I’m really involved with it. I now mostly wear Precious, which mum made for me and we named after the fashion boutique I run. When we talked about having a scent for Precious, I hadn’t really verbalized it or discussed it too much with Angela, and then she mentioned she’d got something in mind, so I didn’t really give her a brief, at all. When it was ready, I absolutely loved it. I wouldn’t have imagined it any other way. So it was a kind of collaboration, but not really at all! 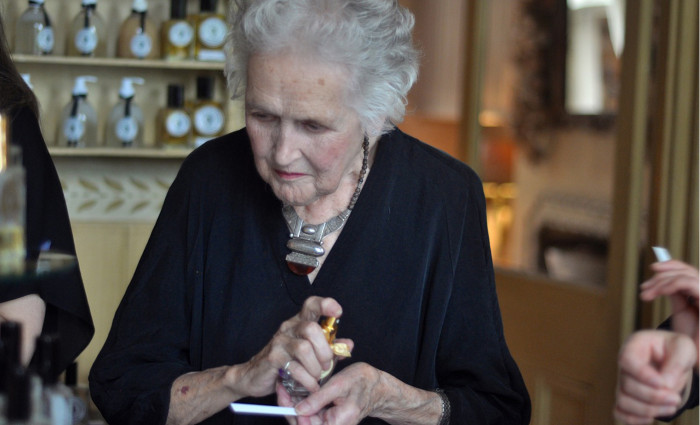 Angela: It was about the shop as much as Kate, since the shop reflects her personality. It made it easier not putting too much emotional stuff in it. It needed to be elegant, not too sweet, interesting, with a good base. She always prefers pale colours and silver to gold, so I used tuberose, lily of the valley, roses and jasmine, and set them on a soft mossy base.
I was very surprised when Precious won a FiFi**, I don’t generally enter things and when I phoned up it was almost too late. They said ‘you’ve got 24hours to get a bottle to us’, so we squeezed in at the last minute. And low and behold! Nobody knew who the hell we were.
Kate: It was amazing, we were shortlisted with some terrific perfume houses, it was an honour just to be listed. 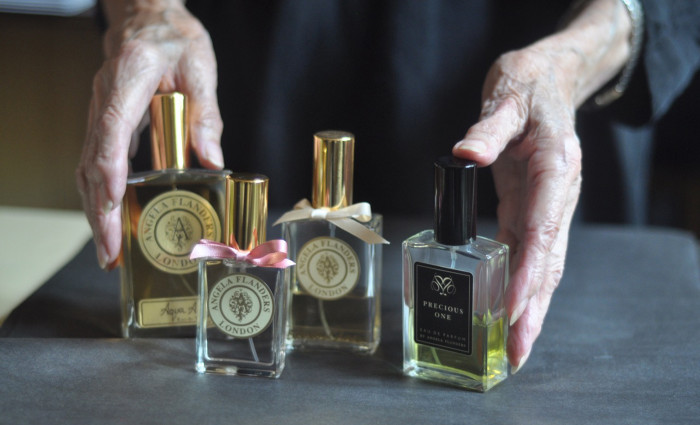 Angela: I almost never wear perfume as when I’m working it’s not a good idea so I get out of the habit, and I sometimes find myself half way to somewhere and think ‘oh bugger’ I’ve forgotten to bring some perfume.
Kate: When we go away we’ve often barely got a bottle of perfume between us because we’re always in the shop where there’s a bottle to hand.
Angela: I do wear Rose Poudree. It’s got old-fashioned centifolia scent, a violety powdery rose, with a bit of iris which dries down nicely, I’m very fond of it.
Kate: I really like Moroccan Rose, which I wore a lot at one point, it’s a big red rose, a very comforting smell, and I wear Tuberose sometimes, which is true to the flower; a waxy, white floral, very sexy, not overly sweet. 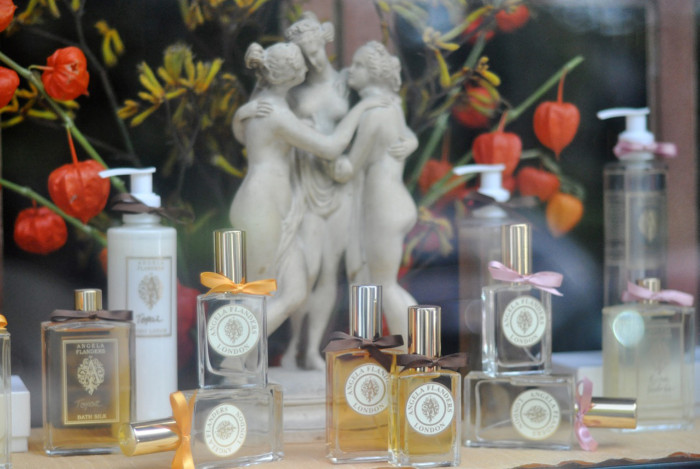 Angela: Perfume is about creating an atmosphere, when I was making home fragrances, I was always thinking of the kind of house that it would smell in. I can be inspired by a story, a name, a place, a visual even a poem (Angela collaborated with beauty journalist and poet Victoria Bentley on a limited edition snowdrop fragrance,  Breath Of Hope) all manner of things. I always think ideas are flying about the atmosphere and it’s a case of picking one out.

With Aqua Alba and the collaboration with Johnnie Walker, they wanted me to reflect the aromatic notes of the Black Label whisky, I fancied using the smells of the islands that made the stuff. I worked with Jim Beveridge, their chief master blender. His output is something like 18 million bottles a year, if I make 18 bottles it’s a miracle. But we both came at it from the same point of view.
I started with a peaty earth base and added vetiver and cedar wood. The middle had honey notes and the top notes are the peat smoke. I blended them and it worked like a miracle the first time. It smells of the islands that made the whisky. 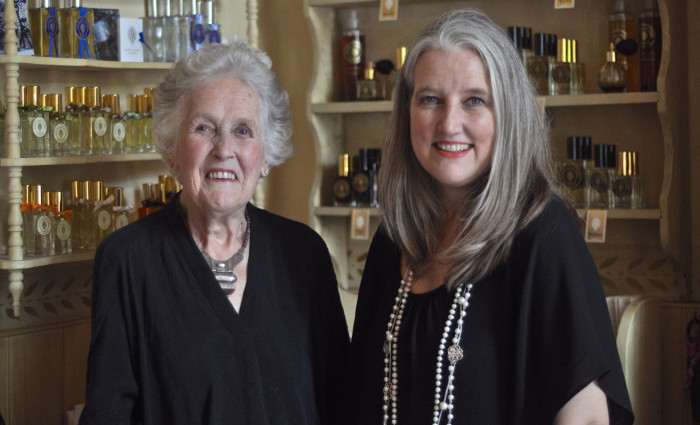 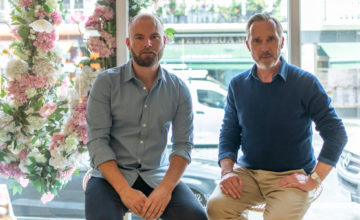 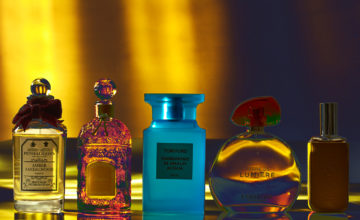 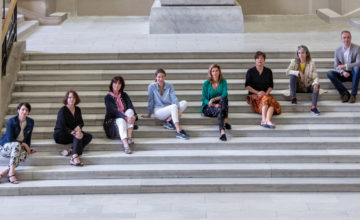