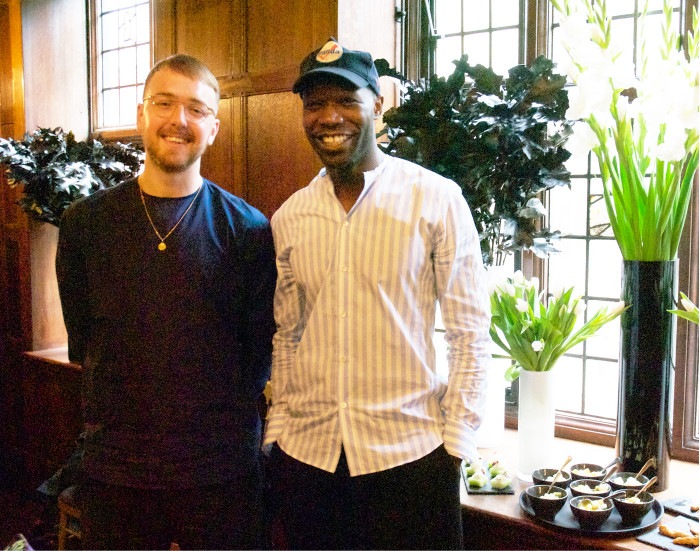 Tomi Ahmed (right) and Leo Gibbon (left) are co founders of fragrance brand IIUVO. Leo and Tomi met at a party where they bonded over hip hop, films and ahem, candles, as you do if you are cool twenty-something dude. Tomi was a visual merchandiser for Comme des Garcons at the time and Leo was a DJ and sometime shop worker, both shared an unusual love of fragrance. Leo, influenced strongly by his mother’s florist shop, is the brand’s nose and their new candle range of three fragrances sold out in a week when they launched at Paris fashion store Colette. We caught up with them at Liberty, where they wouldn’t tell us what they were wearing, we’ll have to stick with the candles until next year…

Tomi: Today I’m wearing our fragrance which comes out next year which I’m not allowed to name! I can tell you it’s elegant, subtle with a sense of chilled decadence to it.

Leo: Today I’m also wearing the fragrance we’ll be releasing in March. This particular scent is my favourite, it’s mysterious with a strong earthy note, together with a sweet, succulent note. To be honest, the combination of the two main notes I used turned out better than I expected! I don’t think there’s anything on the market I can compare it to, when I show it to people they have no idea what it is, it has an air of mystery to it.

When I put perfume on, I don’t want to go over board with it, two simple sprays around my neck and that’s it.