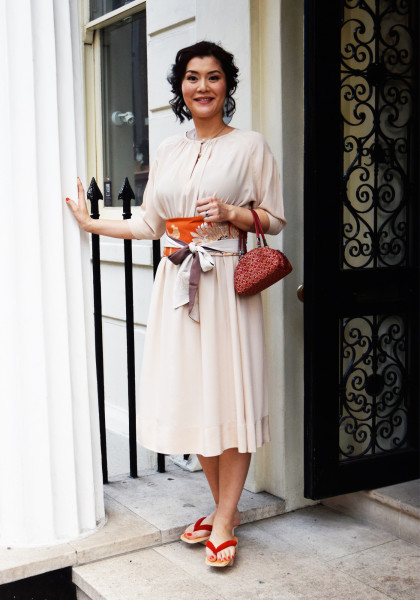 Who Yuki Gomi, Japanese chef and cookery writer. After training under master sushi and noodle chefs in Japan and the US, Yuki moved to London to teach traditional Japanese cooking and to write. Her book Sushi At Home is published by Penguin. She has collaborated with Illuminum London to create her fragrance Yuki, as part of the 95 Percent series of taste and food inspired scents.

Today I’m wearing Yuki, it’s been two years in the making and is a collaboration for Illuminum London. Barnabé (Fillion, the perfume ‘nose’) and I discussed my background for inspiration. I grew up in Tokyo and in my grandma’s country house near Mount Fuji and I remember so much about her house, with its smokey woods, the smells of my childhood food and of course lots of green tea!  Barnabé created my childhood in a scent and it makes me feel nostalgic to smell it.

Japanese people don’t wear much fragrance but I did, because I loved it. My first one was Calvin Klein’s Eternity and every time I changed my life or moved somewhere new, I changed my perfume.

Japanese people are really against specialist chefs, such as sushi chefs, wearing perfume so this is a very brave break from Japanese tradition!. One of the reasons women cannot be a sushi chef in Japan is because they wear cosmetics that have a distinct smell and you have to be plain smelling.

If you go to a traditional Japanese restaurant you shouldn’t wear too much perfume. When we go to a restaurant my mother tells me ‘don’t put on too much! because people know….’