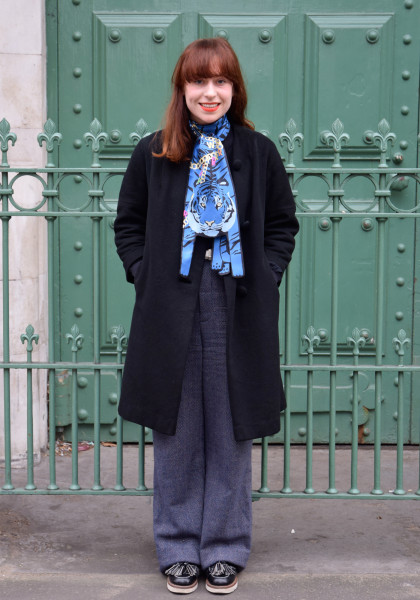 Who: Cleo Ferin Mercury, founder and designer of Cleo Ferin Mercury scarves. She is from Paris but lives in London and sells her wonderful scarves through stores such as the V&A in London, Colette in Paris, Luisa Via Roma in Italy and Harvey Nichols in Hong Kong. Her scent story is quite unusual…

Today I’m Wearing Chanel No 5. I was once travelling to Shanghai by plane and I was listening to the radio channel on the entertainment system. I kept seeing at the side of my eye a weird looking man, who kept staring at me. It was really annoying but i ignored him and carried on listening. Then he came over to me and said ‘Do you like channel five?’ And I thought he meant the radio channel, which I was enjoying, So I kind of went ‘yeah, whatever’ and went back to listening.

He came back an hour later with a massive bottle of Chanel No 5, so he’d meant the perfume, not the channel. It was so odd, and a bit creepy. So I said, ‘no thanks I can’t accept it’, but he said, ‘no, really have it, you’re just the lucky one today, I want to give you a perfume’. I said no about ten times, but in the end he just left it with me so I kept it.

I thought maybe he was a bit tipsy, as we were all waiting for our luggage to arrive I thought maybe he’d had something to drink, but then he said ‘bye bye’ and that was it. It’s funny because I’d never have worn Chanel 5, but I just loved it instantly. I never saw him again.