“You’re not buying knickers’. Taking your time over perfume, with Jo Fairley

Josephine Fairley is a bright, cheerful and super informed whirlwind of achievement; the youngest ever women’s magazine editor, co-founder of Green & Black’s organic chocolate, award winning beauty writer and now co-founder of The Perfume Society, our favourite go-to reference site for everything fragrance related. We take a deep breath and catch up with her fragrance story.

I feel exactly the same about the Perfume Society as when we launched Green & Black’s in 1991. It was a point when the food world was changing, people were becoming interested in artisan producers and the chefs were coming out of the kitchen and getting people excited about recipes. People are waking up to perfume in the way we did with food 25 years ago, so it’s an incredibly exciting time in the fragrance industry.

My first memory of smell was very vivid. I’m in my granny’s rather run down greenhouse, which was attached to her house and had such a distinctive smell. She had rose geranium and tomato plants and she’d take the leaves and rub my fingers with them to smell. It’s such a strong memory that I can see the pattern and colour of her dress. I can’t have been more than two and I‘ve been pretty much obsessed with smell ever since.

Perfume wise, my father travelled a lot as a journalist, so he was always going through duty free. He’d bring my mother and I back something lovely. For her, it was Femme de Rochas, Chanel No 5 and Lanvin’s Arpege. For me it was the cool fragrances coming out at that time, such as Chanel 19, Rive Gauche, Calandre, and Miss Dior. I had a precociously wide selection of fragrances from a young age because of my dad.

And I totally loved smells. It never ceases to amaze me how divorced from their sense of smell many people are. Life is better when you can smell well. Someone said to me recently that his idea of a perfect world was where nothing smelled of anything and we didn’t have to smell, that seems barbaric to me. It’s only anecdotal but, I’m pretty sure that when you improve your sense of smell, your palate improves as well. 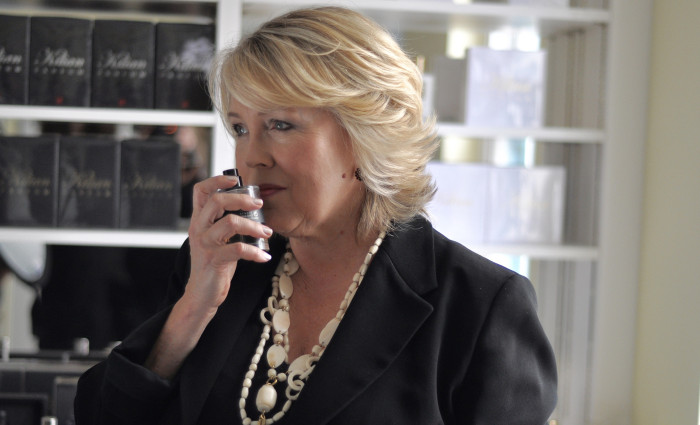 The first fragrance I bought for myself was Aqua Manda. I still love it and I was vaguely involved in its revival because I started a Facebook group called Bring Back Aqua Manda. Somebody saw it and thought, actually why don’t we? I was an informal consultant because I could remember the original. I think it’s pretty good, they did it from headspace technology using an original bottle, because no one at Goya had the formula.

When people ask me what fragrances they should buy, I send them to FR.eD. It’s part of the reason The Perfume Society website exists. Lorna (McKay, co-founder) came up with it in 1992, and I wrote about it in You Magazine. I was blown away by how it was almost psychic in its ability to pick the right fragrance and I literally nagged her for 20 years to bring it back to life. It’s the most visited part of the website and I always thought it would be.

You should take your time when buying fragrance, you’re not buying knickers. It’s how people will remember you and it should give you a huge amount of pleasure. Our fragrance preferences are quite narrow, we like probably two of the fragrance families. And we tend to stick to them. 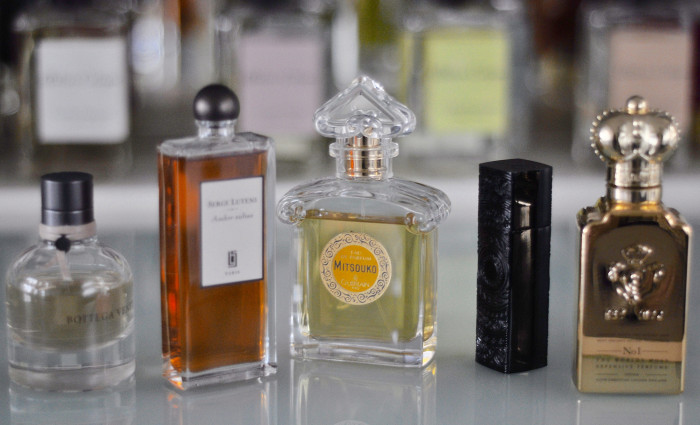 My Desert Island fragrances would have to include Guerlain’s Mitsuoko. It took me a while to find my Guerlain. I think it’s the kind of brand you have to immerse yourself in. Mitsouko’s like putting on a pashmina, I feel warmer when I wear it, it’s sophisticated and delicious and absolutely a winter fragrance, it comes out with the opaque tights and goes away when they go back in the drawer.

I’m also immensely fond of Shalimar, which my husband, Craig, introduced me to, he’s a bit of a fragrance freak himself. Bizarrely, he went to high school on an American airbase in France, where all the teenage girls wore Shalimar. So he completely loves it and bought me a bottle. I thought for a while I wasn’t a Shalimar person, because it’s a bit blousy, but actually it’s magical and everything a perfume should be; delicious, feminine, girly and a little bit naughty.

Craig didn’t wear anything for years, but now he has lots of different oils and has started blending things, he already has civet and castoreum. He was the man who imported patchouli oil to the UK in the 1970s, so that’s his smell. He used to trade in brown rice, tamarind, seaweed and patchouli, so he’s largely responsible for the fact that most people associate patchouli with hippies. Recently, I bought him a bottle of Jovoy Psychedelique, which is very hippy, it’s patchouli with amber and I love that on him. It had to go off the dressing table for a while, because my step grandson started wearing it, which was all wrong and a bit disturbing.

Quite a lot of my favourite fragrances are chypres, which I think is the most sophisticated fragrance family. They aren’t straightforward, they’re complex and sometimes people aren’t sure if they like them because they take a bit of understanding. They’re very grown up and I think you graduate to them. I’ve loved Botegga Veneta since it first came out, I’m on about my fourth bottle and now I couldn’t live without it. The fragrance has a lovely leathery chypre quality to it. It makes me feel a bit cosier when I wear it and it always gets comments from people. 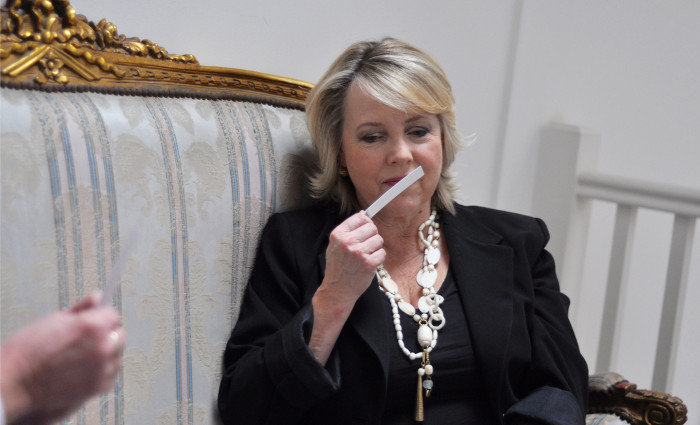 By Kilian Intoxicated is my newest discovery. It’s got a strong hit of coffee in it, and is very addictive. What I really like about this is the little atomisers are refillable. One of my bug-bears about perfumery is that you get these lovely bottles that you can’t refill, because the neck is clamped onto the bottle. You can’t even recycle it properly because it’s two separate materials. By Kilian does refillable candles too, because you just don’t want to throw those containers away.

I don’t understand why there isn’t more refilling, I truly admire Thierry Mugler for that because it has La Source, where you can go and have your bottle refilled.

Clive Christian No 1 is one of those fragrances that’s complex, the moss is really mossy, it makes me sit a little straighter, walk a little taller and want to wear a slightly higher heel. It’s sophistication in a bottle.

Serge Lutens Ambre Sultan is the sexiest scent on the planet. I’m loving that amber is having a bit of a moment in perfume, it has that soft sweetness. It’s a note that the Middle Eastern customer understands because it’s part of their culture, but it’s not got the heaviness of oud, therefore it nicely bridges East and West. This is a really naughty, sexy scent. You wouldn’t want to drench yourself in it and walk down the street, you couldn’t be responsible for the results! I love it, but it’s definitely a dab, not a douse. 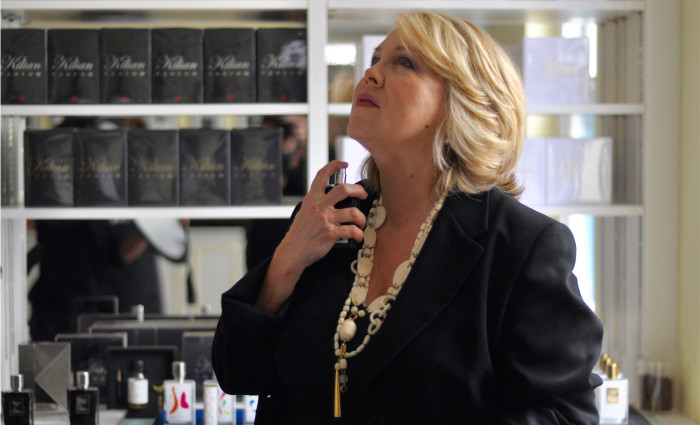 I would like to see the inclusion of wellbeing in fragrance in a serious way, and for perfumery to embrace some of the concepts of aromatherapy. You’ve got Clarins Eau Dynamisante, and the seven Shakra Balancing Body Mists from Aveda, which I also consider to be both treatments and fragrances. Valeur Absolue has minerals in the fragrance bottle, with the idea that the minerals infuse into the notes, which have been constructed to have a mood shifting affect. They are all lovely and I am surprised it’s not done more.

I do spray my pillows, I’ve got the new Dans Mon Lit, from Frederic Malle and I always spray a Cathy Phillips Deep Sleep Pillow Spray from This Works. She has scientific studies to show it works and it’s absolutely knock-out drops for me.

I always spray my clothes, particularly the linings of my jackets, I also spray them before they go back into the cupboard, so when I get them out again they smell nice. My scarves get to be a bit of a mash-up, but I have this theory that, a little bit like your interiors, things you like kind of all go together. It’s the same with fragrance, you’re not going to get a bad blend out of things you like.

And don’t be scared of layering, what’s the worst that can happen if you blend a bad one? You just wash your arm. It’s not tattoos!

The Middle Eastern consumer is much better educated with fragrance, they’re not scared of layering up, and will wear five fragrances on the body and two on their clothes. In the West, there’s still this slight Victorian ‘you’re a fallen women if you smell too much’ attitude that’s prevalent. So I’d say experiment and have fun with it. You might have a few perfumers having the vapours tampering with their precious creations, but hey!

A big thanks to the delightful crew at Les Senteurs for hosting our chat.