In Conversation With: James Craven and Josephine Fairley 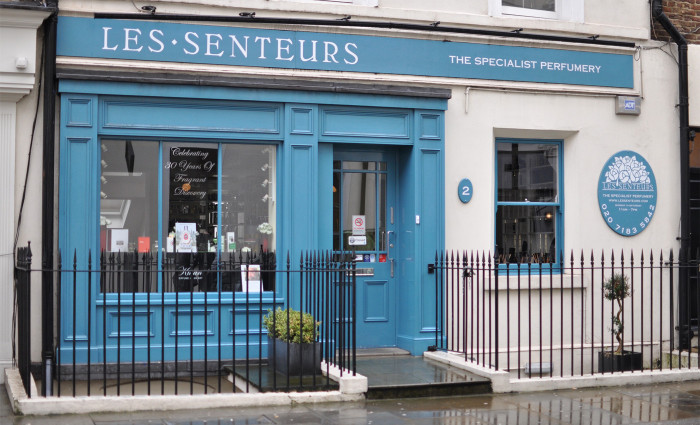 We recently caught James Craven, perfume archivist at the independent perfume boutique Les Senteurs, and The Perfume Society’s co-founder Josephine Fairley in conversation at the Seymour Street store in London. We eavesdropped and threw in a few questions of our own. Watch out for our take-over of the Les Senteurs instagram feed from Thursday 12th to Saturday 14th May, follow us both on Instagram: @wewearperfume and @lessenteurs.

Josephine Perfume language can be intimidating. When I’m writing about perfume, I often explain how to pronounce names, like how you say Chypre, it’s ‘sheep’ and then ‘raa’. And for Fougere it’s ‘foojhair’…
James That sounds a little like Fanny Cradock! Once you know how to say it, there’s nothing to be frightened of. The British, in particular, if they are intimidated by something, they will keep away from it.
Josephine I have these discussions with fragrance people about the language we use, I talk about ‘notes’ because that’s what we understand, we know what a wood note is, what a sweet note is, but some writers think we need a language developed specifically for perfume.
James We’ve got to make do though, because we don’t really have one, and being grand about it puts people off. I also think, and I’m sure you agree Jo, you’ve got to alter your narrative slightly depending on who you are speaking to, because it’s so very individual, people’s sense of smell and how they see things.
Josephine We took a very deliberate tone with The Perfume Society not to be patronising, not to assume everyone knew everything. So much perfume writing assumes a great deal of knowledge by the customer and then they flee from it when they don’t understand.
James We had a customer who wanted a new fragrance, she said repeatedly she did NOT want flowers, anything but flowers, but then we ended up at the gardenias and roses because she loved the way they smelled. 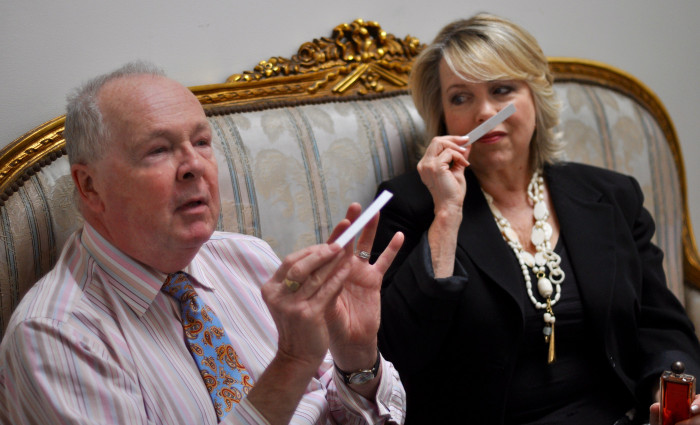 Do shoppers in Les Senteurs pick fragrances that fit their personalities?
James Perfume can act as a supplement to balance people. I find that often, someone very flamboyant and extrovert and brilliantly dressed will go for a fragrance that is muted and abstract. It’s yin and yang. Again, a man who is more sensitive and feminine will often go for something very masculine and butched-up, it’s as if they’re trying to balance things, quite comfortably, with themselves.
I think that perfume acts as therapy for some people, I think that’s a huge part of it. In fact, it’s almost entirely about that if it’s going to be successful, because you’re looking for something to bring out and enhance your personality. 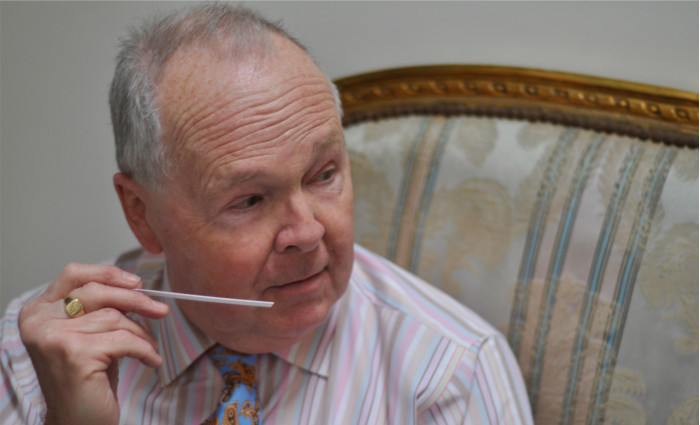 Is perfume more important than clothes for some people?
James Yes absolutely. This is ticklish for public consumption because you have to be careful how you put it, but people of both sexes, and it’s not a question of budget or economy here, who don’t take too much interest in their appearance care enormously about their scent. One or two have said to me over the years ‘The scent is all one needs, forget about the shoes, the bag, the hair, because the scent is me’. It’s saying everything about them.
This is where Les Senteurs and The Perfume Society come in, because we both specialise in helping people find the right scent. It’s great if the world thinks you are wearing the right scent obviously, but really the most important thing is that it’s all about you, the wearer. It doesn’t matter what the scent is, if it’s pleasing you, the wearer, then it’s doing its job.
What about layering and mixing fragrances, is that OK?
Josephine I hate perfume snobbery, and there’s so much of it. There’s a lot of people in perfumery who know a lot but convey it in such a way that it’s lost in lots of ego. Listen, I will happily doctor a glass of wine by adding something that I think will make it better. If something is a little bit too dry and I’ve got a bottle of Chardonnay in the fridge I might add a slurp of it to round it out a bit and I don’t think there is anything wrong in doing that.
James Or a teaspoon full of honey, which is a cheaper way! Anything that might make it right for me is fine. People often say ‘may I do this’ or ‘can I layer? or ‘am I allowed?’ to do this and that with fragrance…
Josephine Am I allowed! It’s like the perfume police are going to come and take them away!
James And yet at the same time its such an intuitive experience, so there’s this contrast, and I think it’s why people do get very nervous and timid when buying
Jo, and that is what The Perfume Society is for, is to make that process better. 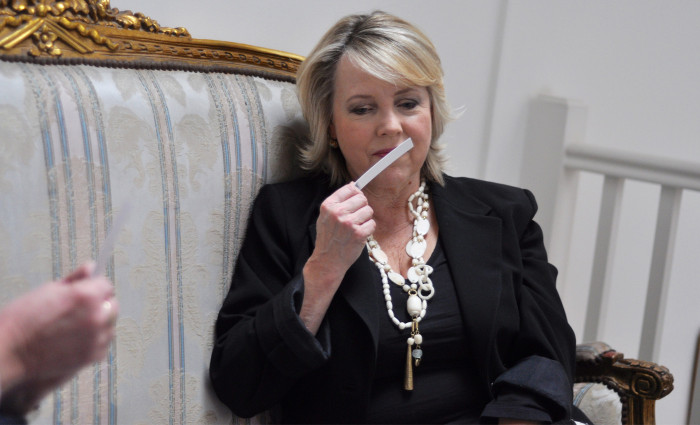 What trends are you seeing currently in ingredients?
Josephine Amber is having a moment and I think there’s a bit of a Chypre thing going on.
James Yes, definitely green Chypres. We’ve had a lot of patchouli recently too which is often added to green Chypres. But don’t you think Jo, that the patchouli we smell today is different from what we smelled 20 years ago?
Josephine Yes, it’s lost a lot of the dirt and chocolate.
James The chocolate! It used to be like a chocolate box
Josephine I love a chocolaty-patchouli. Now we have something called white patchouli, which is stripped down, like the patchouli from Tom Ford. 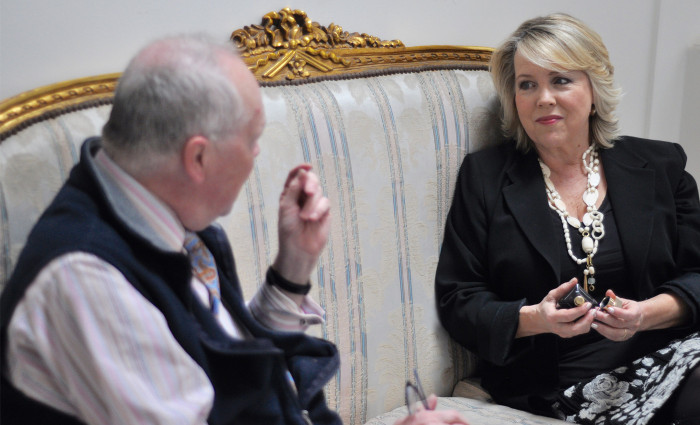 What fragrance is always a guaranteed hit with shoppers?
James Oh that’s an intriguing question, a hard one to answer.
Josephine Portrait of A Lady by Frederic Malle?
James Yes, definitely that, I’d need to get some small detail from the customer before recommending anything, something like ‘do you like something subtle and intriguing or something richer, glamorous’…in which case definitely Portrait Of A Lady. If they wanted ‘quiet’ then probably another Frederic Malle, because there is something there for everybody, maybe L’Eau D’Hiver or the delicate En Passant. If they are at a loss completely, due to this language thing with fragrance, I’ll get something out as a milestone and say lets just try this, it’s not a proposal, it’s just a scent out of hundreds, tell me what you think and take it from there….
Do people sometimes get attracted to the bottles before the smell?
James Yes! People like a bit of colour, especially the darker liquids, a lot of customers who want something richer, or more elaborate or an oriental chypre will very often say ‘oh that looks a nice dark liquid, lets try that.’ Sometimes people will also say the label is too masculine, the bottle is too masculine, or too medicinal. With By Kilian, which is in a more elaborate bottle, people with buy it for the packaging as much as for the smell. 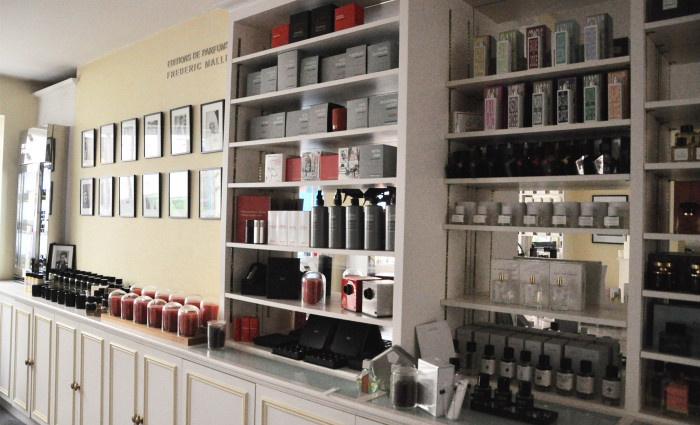