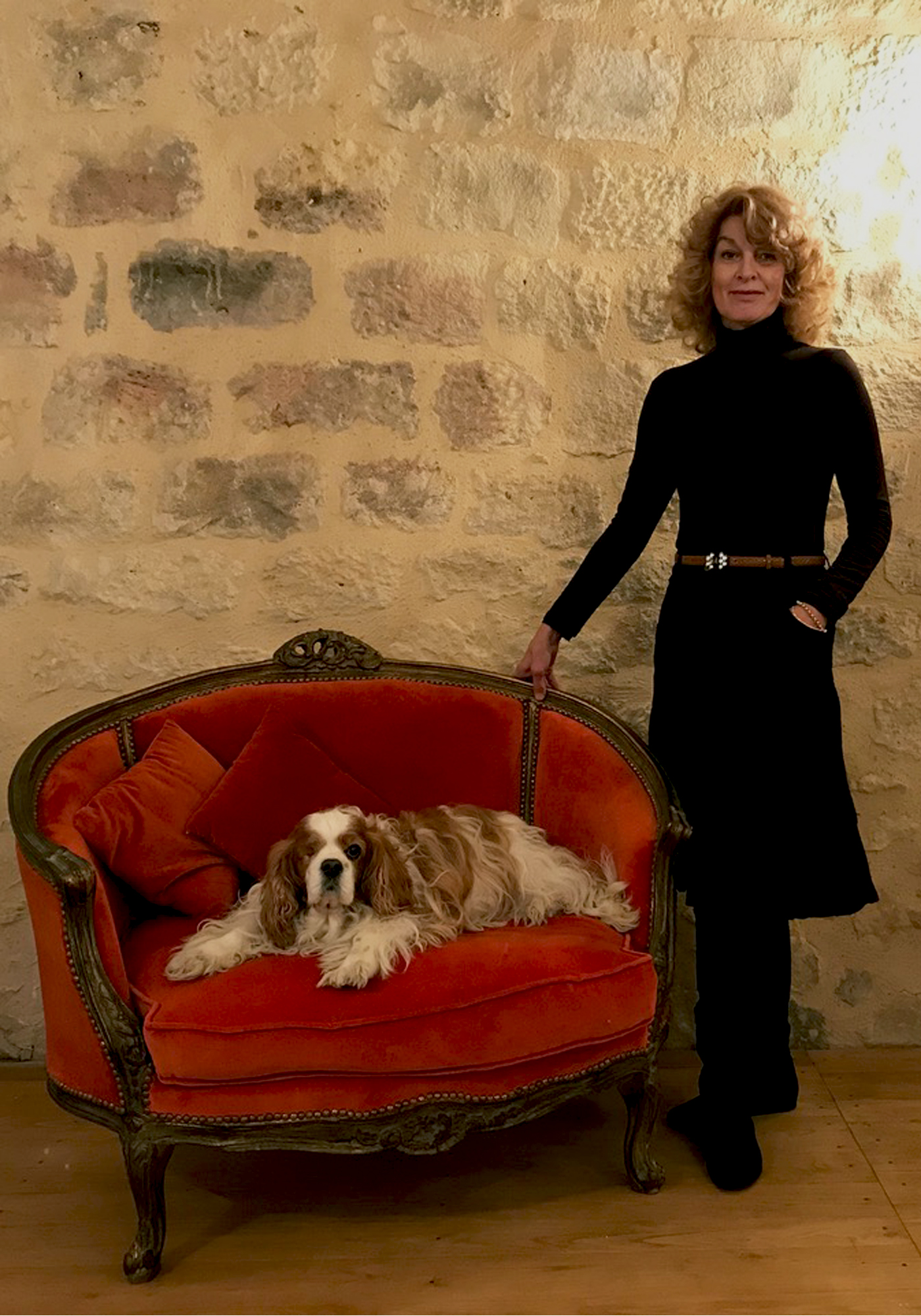 Who: Prudence Kilgour, founder of Prudence Paris. After a career in fashion, Prudence set up her perfume house in 2005 and the range, which now consists of five separate collections, is hugely popular in Russia and Europe. She lives with her husband, who creates the brand’s artwork, and dog Alphie, who has his own fragrance, in Beaumont du Perigord, a medieval Bastide in Perigord.

Who: Alphie, short for Alpha Male. A Cavalier King Charles Spaniel whose mother was a champion of France. He is an important member of the Prudence Paris family and is the ‘face’ of the canine fragrance Polisson. Alphie’s principal function in Perigord is to keep the cats in their place.

Prudence. To day I’m wearing my signature perfume, the original Prudence. The composition relates to the memory of my childhood in Australia, and the family garden where we grew many white, subtropical flowers and citrus trees. It is a simple sophisticated fragrance with spicy undertones.

Alphie. Naturally I have a personal fragrance, distilled from essential oils of rosemary, thyme, geranium and eucalyptus. The fragrance is called Polisson, which translates into “little rascal”. My owners are very keen on gardening and I love it when they trim the rosemary and thyme plants because after they’ve finished, I roll in the clippings. Sometimes I get carried away and trespass into the geraniums. That lands me in trouble. My fragrance reminds me of all this.

Prudence. Fragrance has become one of the most important elements in my life. One spring morning in Paris I was walking around a beautiful square behind the French Assemblee Nationale and happened on the atelier of celebrated florist Henri Moulie. I knew at once that there was something vital within that would change my life. I asked one of his staff if I could see him and remarkably, a few minutes later I was introduced to him.

I told Henri I was captivated and asked him if I could serve an internship with him. He said he could not pay me, but I could start the following day. Arriving early in the morning Henri was already there unloading hundreds of exquisite flowers and plants purchased from the flower market at Rungis. He told me to use whatever I liked to create something for him. By midday I’d achieved two or three creations which earned the approval of his wife and more importantly, of his customers. There followed a very intense learning curve which led me on a journey of discovery into the world of plants and flowers. I had entered the world of Fragrance.

I persuaded my husband to take me to Grasse, centre of the French perfume industry. With a degree of persistence and good fortune I found a talented young chemist whose family had been involved in the creation of perfume for three generations and who was prepared to collaborate with me. Thus Prudence was created. At Christmas time, Henri and his wife also prepared bouquets of white flowers that represented the eau de parfum and a flacon accompanied each bouquet.

Alphie. I’m important and naturally, I have to look and smell good, so fragrance is crucial in my life. I’m actually a bit of a trendsetter as there is a famous hotel in Juan Les Pins, France, once the residence of Scot and Zelda Fitzgerald, which has taken my fragrance to give as a welcome present to other Canine V.I.Ps. Prudence (my owner) also has several European visitors to her boutique who buy my fragrance for themselves as well as their dogs.

Prudence. I wear my fragrance on my skin and on my pulse points. I enjoy spraying on my clothing too.

Alphie. I love wearing fragrance best after a bath. I quite like a dab behind the ears, but I’m not fussy. The fragrance presents no health problems and my veterinary adviser has issued a medical certificate which accompanies every bottle sold.

Prudence. I also have both ambiance sprays and room candles throughout the house, also created by me.

Alphie. Prudence is a busy lady, so there’s always a variety of scents around me at the atelier and at home, but I like my various beds and baskets to have a hint of Polisson, after all, it’s my signature fragrance.