The Long Read: Fragrance For And By Modern Women

If you’ve had even half an eye on fragrance launches over the last few months, you will have noticed a rush of big beauty brands promoting their latest ’empowering’ scent for women. Perfume adverts featuring scantily clad, willowy women lusting over a brooding man are being swiftly replaced by strong females, often accompanied by a hashtag marketing campaign promoting empowerment and independence (looking at you Calvin Klein Women #iamwomen and Ralph Lauren Woman #leadlikeawoman). Hurrah! At last, many of us are thinking.

Many established fragrance brands have lacked a modern approach to the female narrative over the last few years, you’d be forgiven for thinking the only reason to wear fragrance is to create desire and longing in others. And although we love the idea that fragrance makes us attractive to potential suitors, today’s independent women are looking for a scented narrative that better reflects their female perspective and contemporary lifestyles.

Perhaps it’s not coincidental we’re seeing this change in approach, since over the last decade women have been carving themselves influential roles within the perfume industry, both as perfumers and brand creators, bringing to the creative process an alternative female gaze on ingredients and storytelling. There is now a woman, Christine Nagel, as the in-house nose at Hermès, one of the most prestigious positions in perfumery, as well as a host of brilliantly talented female noses within the big fragrance houses responsible for creating many of the big-name brands on the market.

We asked one of our favourite fragrance women, Judith Gross, vice president of creation, design, branding and marketing at International Fragrance and Flavours if female perfumers were on the rise? She told us that there is now – for the first time – an even gender split between male and female perfumers at IFF, including the students coming through the training process.

“But to place IFF into a historical context,” she emphasised, “at a time when men were largely dominating the market, IFF had one of the first woman perfumers, Josephine Catapano, who created Youth Dew by Estee Lauder (in 1953), the brand’s very first launch and it made her an instant success. She was closely followed by the legendary Sophia Grojsman, who created classics such as Paris by Yves Saint Laurent, Trésor by Lancôme and Eternity by Calvin Klein, again when women perfumers could be counted on the fingers of one hand.”

Similarly at UK based CPL Aromas, another of the world’s leading fragrance houses responsible for many of your favourite perfumes, another of our favourite fragrance females, perfumer Angela Stavrevska, told us that of CPL’s 23 perfumers, 10 are now women. Women are also launching their own fragrance brands, relishing the opportunity to fill a hole in the market and bring a female gaze to the fast-expanding niche sector.

At a fragrance event we were at recently, someone in the audience asked ‘can you tell if a fragrance was made by a male or female nose?’ Great question. And the answer is both ‘yes’ and ‘no’. Of course you can’t tell the gender of the perfumer by simply sniffing, it would be like asking if you could tell if a chef were male or female just by eating a mouthful of food. But women do bring a different point of view to perfume making, they offer an alternative to the traditional male viewpoint on how a woman should smell.

What does this mean for the perfume you end up wearing? None of this is about being more ‘feminine’, but it is about creating fragrances from an empowered, female perspective, bringing to perfume creation – and indeed to the perfume business – an alternative point of view.

We’ve met some terrifically modern female perfumers and brand creators during our time at We Wear Perfume, and here below we’ve chosen five who we think best reflect this new narrative in fragrance. We’ve highlighted the fragrances from their collections we think are exceptional, but as with every scented selection it’s a very personal choice, so try as many as you can and enjoy the discovery process! 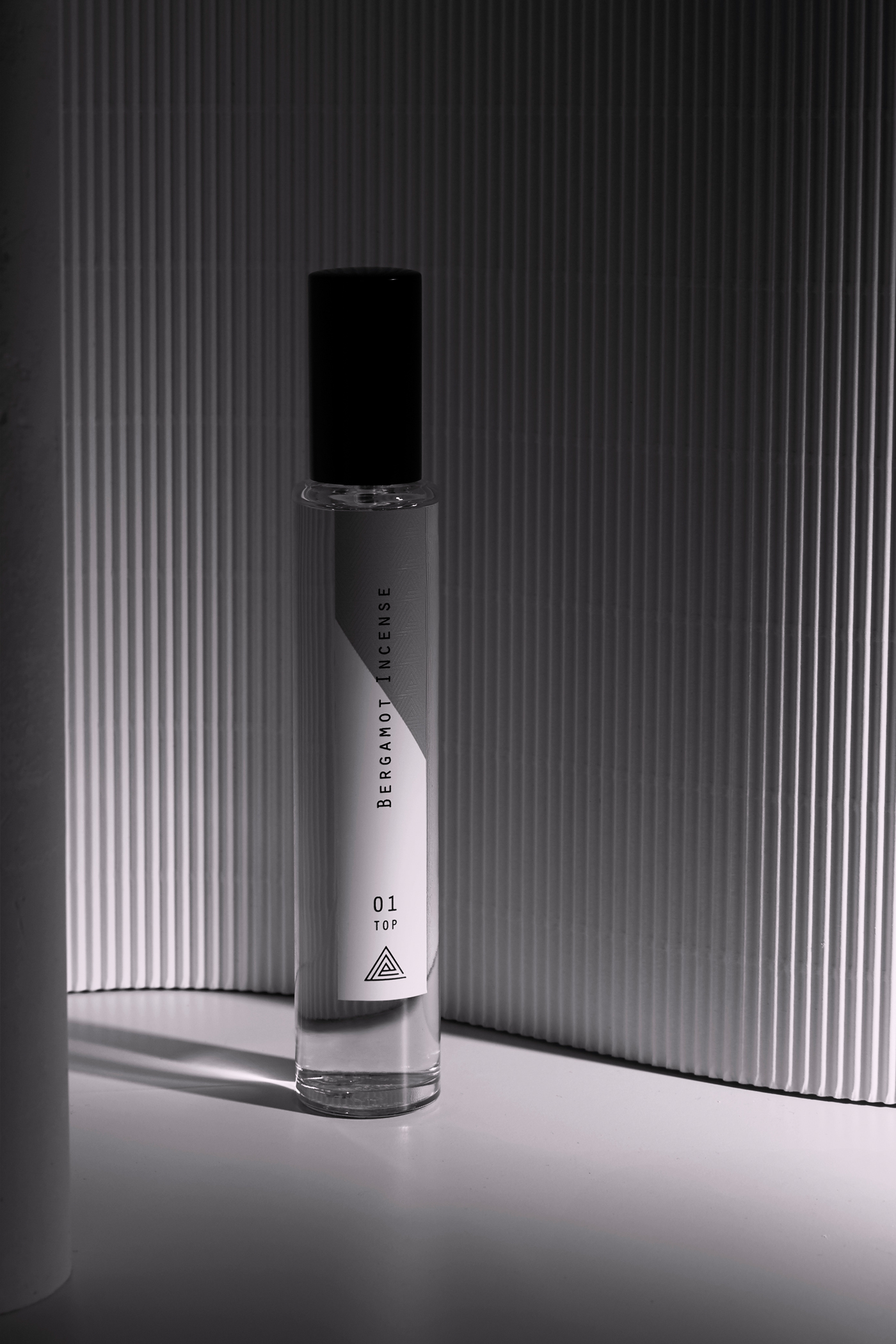 The excitingly modern Emmanuelle Moeglin is something of a disruptor in the world of fragrance creation. Her popular open-lab workshops, run from her hip East London base, allows the enthusiastic perfume shopper to create their own perfumes. She was recently picked up by the mighty L’Oreal’s Open Innovation Startup scheme, which nurtures promising new brands and demonstrates how highly thought of she is.

Her first collection of customisable fragrances, Layers, is a perfume lab in a box – like a more glamorous version of those chemistry sets that turned up as birthday presents from well-meaning relatives. You create your own perfume by blending from the three ‘Layers’ of fragrance provided. The Top Layer is Bergamot/Jasmine, Mid Layer is Jasmine/Osmanthus and Base Layer Sandalwood/Musk, which can all be worn individually or combined in a fool-proof, personalised mix.

Although it’s great fun to customise, we love the smoky bright  Bergamot /Incense, worn on its own, with its clear, sparky opener of upbeat-citrus, smudged around the edges with a soft incense note, achieved by using juniper, bergamot and incense oil alongside creamy iris and churchy frankincense resins. It’s like a cheerfully bright start to the day with the edges pleasantly blurred. 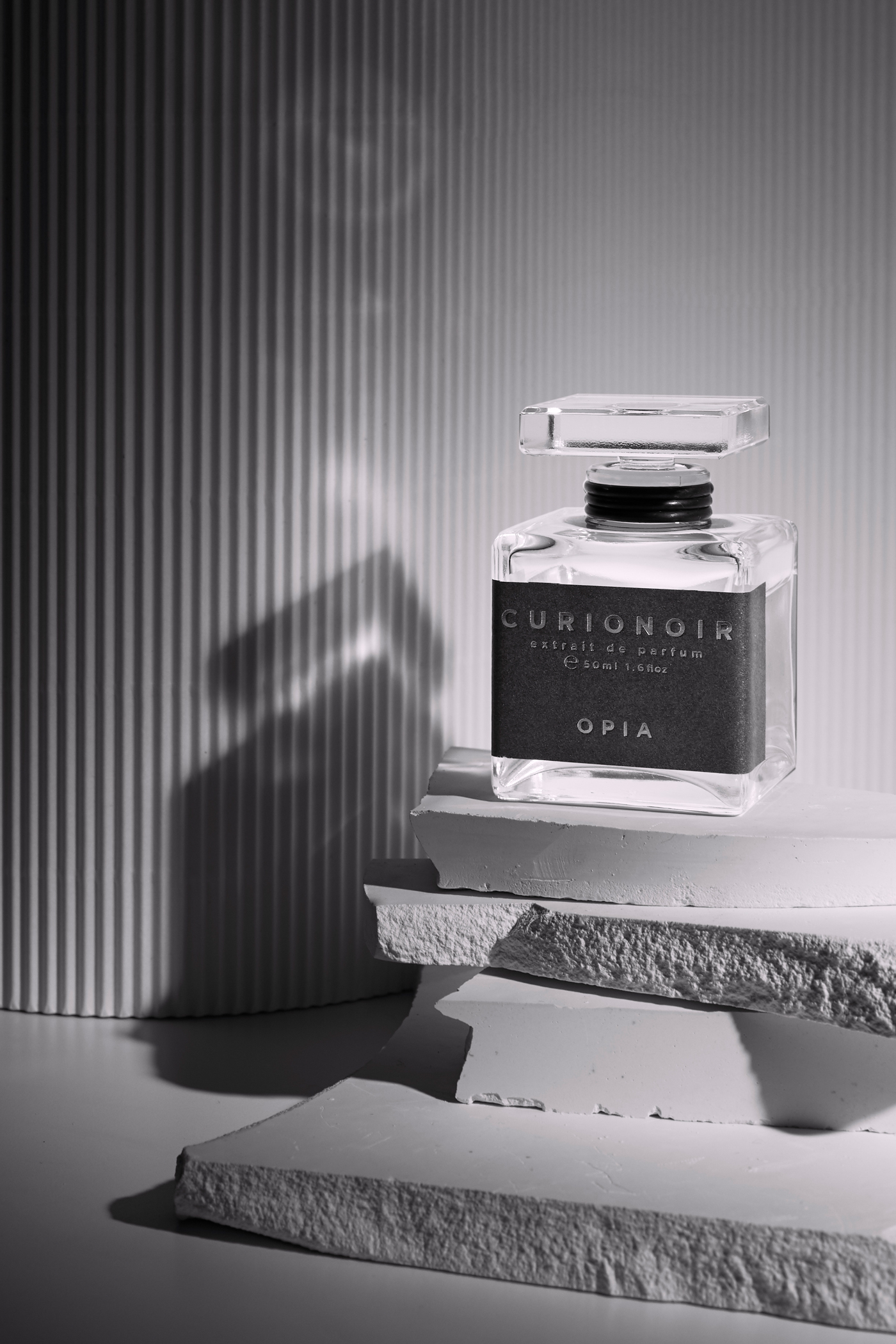 The Female Gaze. Opia by Curionoir

There’s a thoughtful sensibility to Tiffany Jeans, founder of Curionoir perfumes, which comes through in her sensual approach to fragrance creation. She is inspired by her family’s Maori heritage and the influence of the landscape in her native New Zealand. She weaves gentle, family based stories through each of her scents, so Cellar Feels dwells on of how her grandfather taught her to make home-made wine in his cellar, with the smells of the damp ground, their bare feet squashing the grapes, the dusty cellar where fermenting fruits bubbled gently. Or Dark Bouquet, which is a reflection on native New Zealand shrubs and herbs, learnt with her grandmother as she walked the land. Simple, home-based moments in family life, told with quiet reflection through scent.

They are all lovely fragrances, and the locally blown glass bottles are definitely a dressing table treat, but it’s Opia, with its grounded sensibility that perhaps channels her gaze best for us. Tiffany told us it’s about the empowering emotions created by seeing someone eye-to-eye, being vulnerably honest and open, yet confident in your own gaze to not flinch from whatever happens. All this comes to the fore with a mass of cedarwood, Australian sandalwood, teeny hints of oud (used with a gentle touch) and an unusual, herbaceous stab of rhubarb. It is emotionally seductive, almost glowing in warmth and one of the best fragrances we’ve tried for a while. 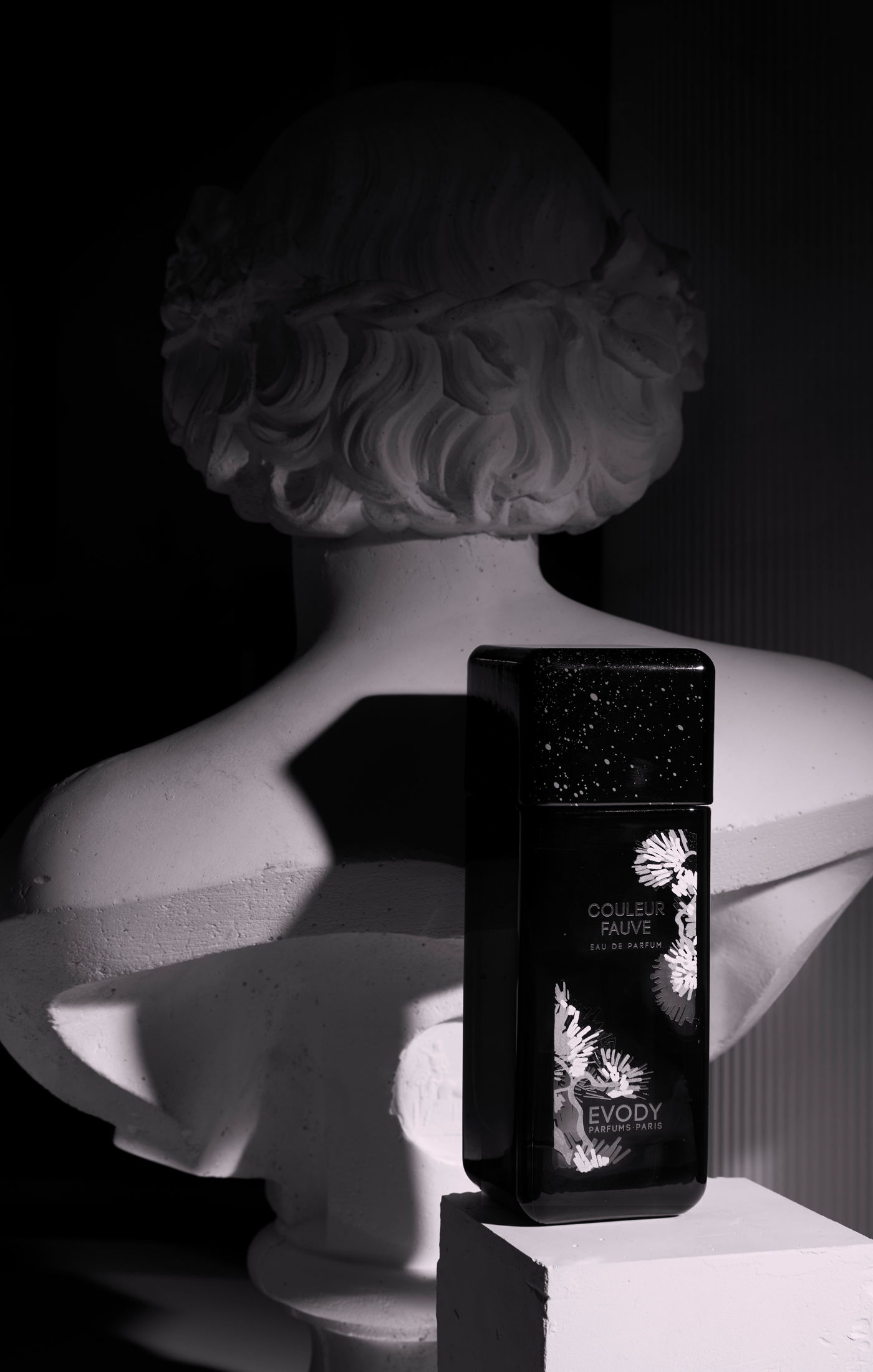 Mother and daughter team Régine Droin and Cérine Vasseur created Evody Parfums together, combining their insider knowledge of both the beauty industry (Régine) and fashion (Cerine) in order to create a small collection of beautiful fragrances that reflect their lives, as mothers, daughters and modern women. This familial bond allows them to communicate their experiences and loves through scent, but do they think that women bring a different gaze to the perfume business? “In creation,” Cérine explained to us, “talent has no gender, but I’m convinced that women have a different sensitivity and an attraction to different raw materials which offer a feminine signature.”

The pair ran a niche perfume store for years before starting their own fragrance line, so they’ve had plenty of experience watching both male and female perfumers in action. Have they found there’s much difference between the two? “I’ve noticed that women and men don’t have the same gaze on fragrance creation,” Cérine explained, “quite often men are about top notes, they have to be strong or dynamic, while women are more about seductive perfumes and they wait for the base notes before judging the fragrance.”

The Galerie Collection, inspired by art, features one of our favourite Evody scents Couleur Fauve. It was created in collaboration with another talented female – the perfumer Cecile Zarokien. With its unapologetically sensuous overload of amber, spice and dry vanilla and its wildly glamorous hit of raisin-drenched patchouli, it like holding hands with bold emotion. This is no shy wallflower of a scent, instead it encourages daring and confidence. 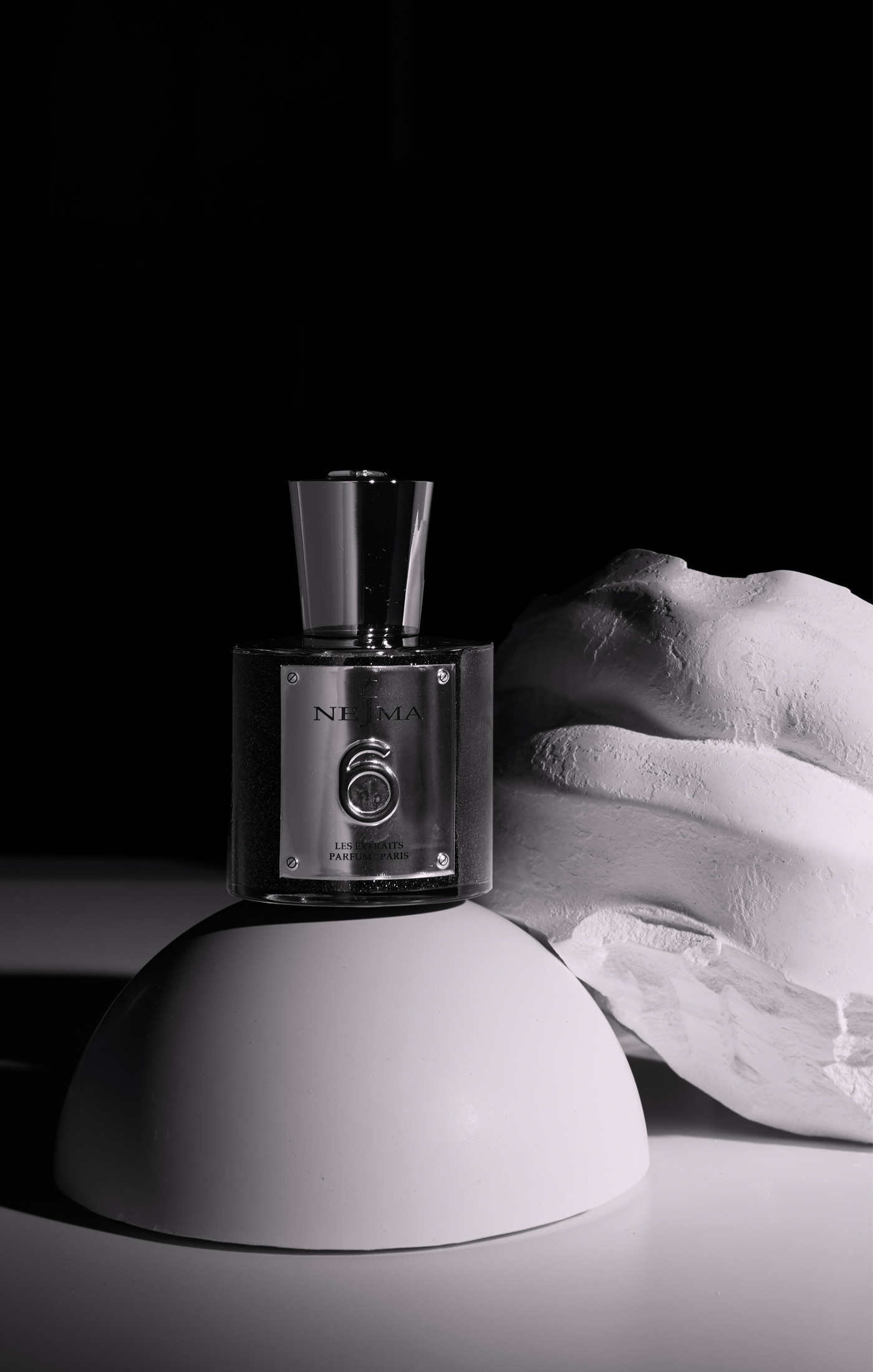 Innovative Feminists. Extrait No 6 by Nejma

The founder of Nejma fragrances, Marie Lise Bischoff, has based her collection of fragrances around a far eastern fairy tale, mixing romance, fantasy and scent into a very captivating story, told seven different ways by seven daughters. She’s also something of a girl-power supporter, having spotted young female nose Alice Lavenat and her award winning creation at the World Perfume Congress’s young perfumer of the year competition. Alice won the day in 2014 with her blackcurrant creation and Marie Lise recruited her immediately, encouraging Alice to put her winning formula into a production run as Parfum D’Alice and allowing her to create fragrances for the Nejma collection.

The newest launches are extrait version of the original seven, and they all take on a deliciously richer character. No 6 celebrates an intoxicatingly delicious tonka bean, warmly baked with coconut, cinnamon and lavender. But it’s not a cliched gourmand, instead it’s grounded and strengthened by a smoky incense and the anchoring thread of woodiness, all given an intimate personality due to the extrait strength, worn more for the wearer than for others. 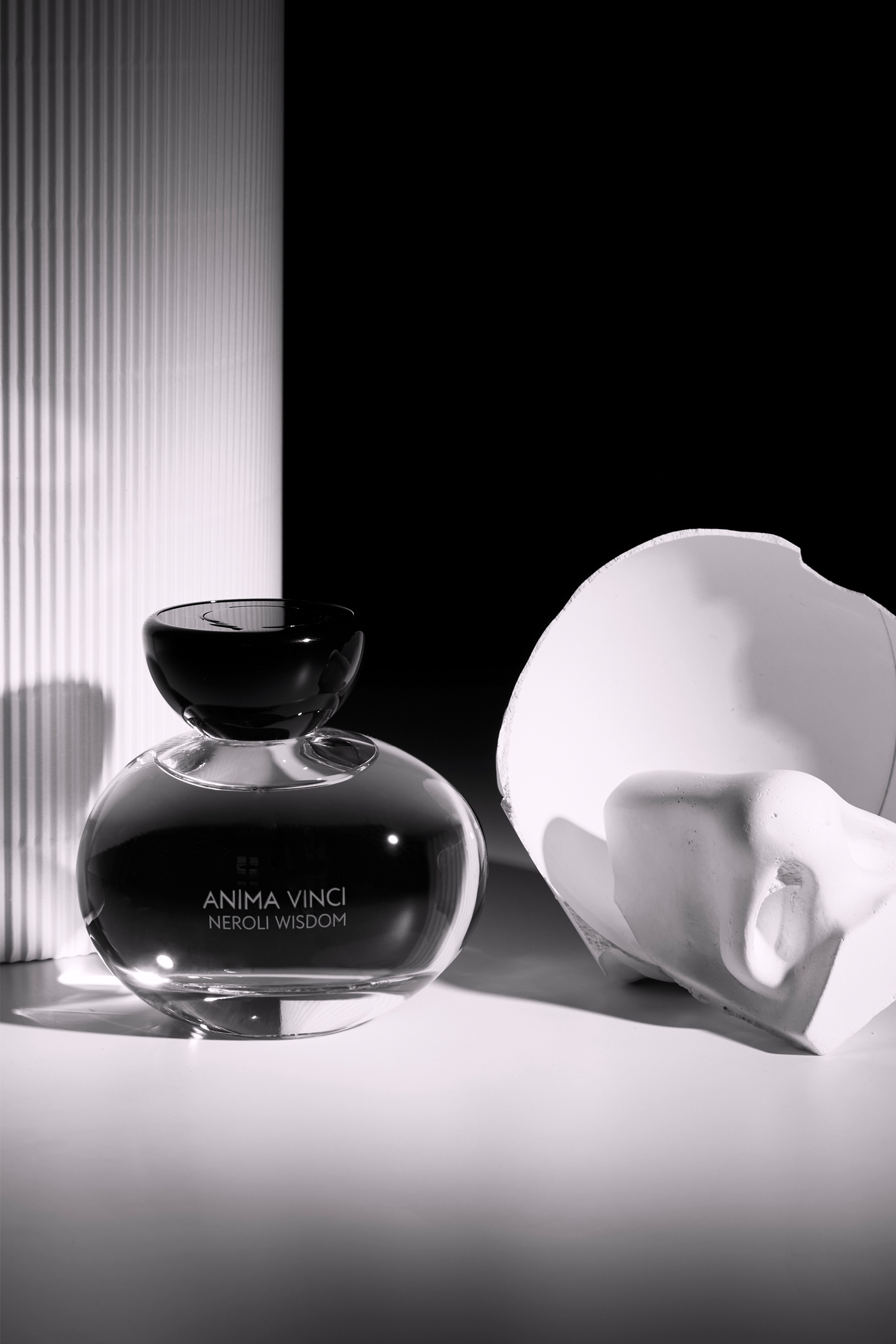 Emotional power has been harnessed at Anima Vinci, a new fragrance house launched by Nathalie Vinciguerra, which combines ingredients in a mindful and grounding manner. We’ve written previously about how fragrance can improve wellbeing with a thoughtful combination of ingredients, and there is a feeling of meditation-in-a-bottle calmness to many of the fragrances within this beautifully elegant collection. We asked  Nathalie if she agreed that women bring a different set of emotions to fragrance creation. “Most definitely” she told us, ”there are some great men master perfumers out there however, I’ll say this, women in perfume creation have an intricate relationship with passion and a way of delivering a story that takes you on a journey that only a woman can narrate, in an emotional way”.

Nathalie’s newest fragrance Neroli Wisdom, is a glorious gush of orange blossom, designed by perfume nose Beverly Bane to be a representation of balance and calm. Its richly rounded orange-ness seems to radiate warmly from the centre of the scent, while a trail of soft jasmine colours the edges of the scent cloud with a floral handprint.

Our beautiful images are by the talented Kate Anglestein. Set design by Imogen Frost